Artist Blog Featuring A West Highland Terrier Professor who paints, gives lectures and buys art by other dog artists which also paint pictures of other dogs. Dr. Bear's friends are “Little Angel”, a dog librarian and “Tootsie Pop”, a gossip columnist and paparazzi. 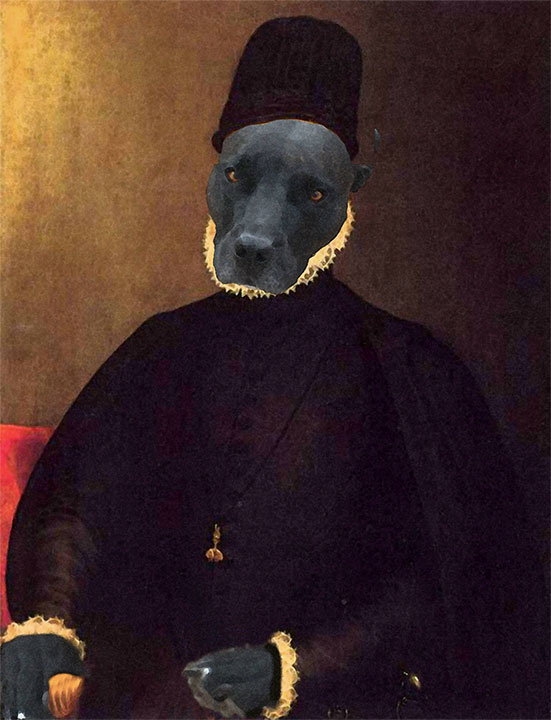 Hound Dog Brown is one of America’s most skilled painters of pups, especially hard digging, cheerful street urchins who earned a pittance as boot blacks, newspaper vendors, to name a few. In some dog homes, he was dubbed the “Boot Black Doggael” because of the glowing faces of his puppy figures and his skill of painting. His paintings of these sympathy-arousing doggies were so popular in a Victorian era of increased industrialization that he became a boneified boneiare from painting sales as well as royalties from lithographs. Who wouldn’t give a bone for this tail wagging painting of Dog Boys New York.

Here is a wonderful self-portrait by the famous German Aldogt Durer.  Durer is best known for his paw-prints of various types.  He shows himself here as a prosperous young dog in the prime of life.  It is apparent that he has a lot of bones.    I think we all can wag our tails at this painting.

Every once in a while we all like a painting just because of the subject.  This little painting, “All Cats Cheat” is that for me.  I howled with laughter over the Bulldog with the cigar.  He of course has an excuse because all cats cheat.  It is good to have a bone to bury once in a while.

This is a lovely puppy painting of two sisters, one of whom is a musician. They are resting by the roadside after a rainstorm.  One stops to look at the rainbow, and the second does not or can not see the beauty around her.  This painting reminds us to stop and sniff the day!

As you may remember I am a  great fan of the incredible self taught genius Henri Dousseau.  This talented doggie has done it again.  The Sleeping Shepard is another painting that grabbed my attention like a hot piece of bacon.  The terrified Shepard, sleeping with his flock has met up with much more than he counted on.  You can almost feel the hot breath of the lion.  This is what makes Dousseau such a wonderful artist.

Who wouldn’t like the painting of Peggie Princess by Ruff Rufus.  This lovely Yorkie was greatly loved by many of her suitors.  She is shown here tending her roses in her family garden. Ruff Rufus, one of the first American writers as well as artist was a great admirer of the little Yorkie.  I certainly can see why–wooof.